The Federal Cabinet Approved The Deployment Of Rangers 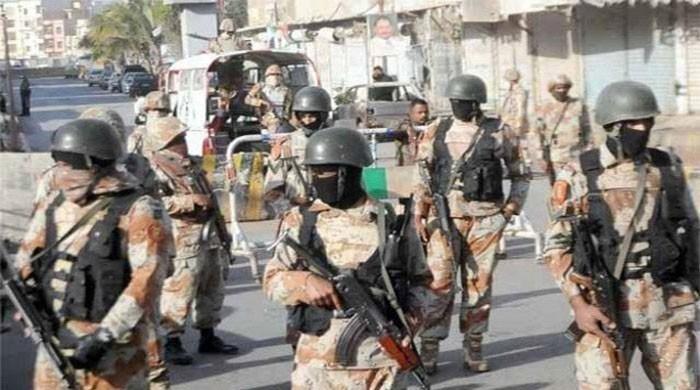 Federal Minister for Science and Technology Fawad Chaudhry said on Tuesday that the federal cabinet had approved the deployment of Rangers in Lahore, Rawalpindi, Gujranwala, Jhelum and Bahawalpur to restore law and order.

Talking to media after attending a meeting of the federal cabinet chaired by Prime Minister Imran Khan, Fawad said that dictation by any party or group was inevitable to the government.

He said that a party or a group can present its demands in a democratic manner which can be negotiated but decision-making cannot be left to any party or group. When his attention was drawn to violence and protests in different parts of Pakistan, the minister stressed that things would get better soon.

“No group or party should even think of making the government or the state the ruler. If a state allows it, it will disintegrate and fall into disarray,” he said. The minister said that any student group, bar association or religious group can present their demands and it can be discussed in a democratic manner, but the government or the state has no scope for dictation.

He said that the government wanted peace and reconciliation and did not want to disturb law and order. He said obstructing the movement of oxygen cylinders was highly inappropriate, as 4,100 coronavirus patients already needed intensive care.

“Special arrangements are being made for easy transportation of cylinders. Pakistan is the fifth-largest state and we cannot leave groups or parties to dictate their decisions,” he said.

Meanwhile, after attending a meeting of the federal cabinet, Interior Minister Sheikh Rashid Ahmed told reporters that the cabinet had reviewed the political, law and order situation in the country.

In response to a question, he said no decision has been made on anyone’s release. He dismissed reports of violence and assured that all would be well soon. He said the government has decided to crack down on violators and reopen several roads, entrances and exits that were closed due to the protests.

Earlier, while presiding over a high-level meeting at the Interior Ministry, Sheikh Rashid Ahmed decided to take action against those who disturbed law and order. He directed to suspend cellular and internet services 24 hours a day in areas where the law and order situation is deteriorating.

On the other hand, a meeting chaired by Punjab Law Minister Raja Basharat decided to deploy Rangers with police at 16 points in Lahore. The minister said that if the situation worsens, help could be sought from the Pakistan Army.

He warned that no one would be allowed to take the law into his own hands and directed the authorities to immediately arrest the violators and register cases against them. In Rawalpindi and Islamabad, more than 30 people were injured in an hour-long clash between law enforcement agencies and TLP workers. At least eight policemen were injured in the clash.

Rawat, Tarnol, Committee Chowk (Rawalpindi) and Bhara Kahu, Athal Chowk, Tamari Chowk and other adjoining areas were declared sensitive. Resorted to stick charge. On the second day of the clashes on Tuesday, two policemen were martyred and 40 others were injured in a day-long clash between law enforcement agencies and TLP workers in Lahore. Three workers were killed and dozens were injured.

In more than 22 locations in the provincial capital, TLP workers and police clashed with clubs, batons, stones and even firearms. Protesters also set fire to police vans and public and private property. There have also been reports of violence against passengers trying to reach their destinations.

Protesters refused to allow ambulances to pass in some places. There have been reports of TLP workers being killed in violent clashes. The TLP has claimed more than a dozen deaths across the country. Throughout the day, traffic in the provincial capital remained chaotic as protesters gathered at more than a dozen points in the city.

Traffic was suspended on the city’s main roads and entrances/exits. Cases have been registered against TLP chief Saad Rizvi and a large number of workers under various sections of the Anti-Terrorism Act, the Epidemic Act and other provisions of the Pakistan Penal Code (PPC).

Rizvi, along with other TLP leaders and activists, has been charged with the murder of Constable Muhammad Afzal in Shahdara. Rizvi expressed frustration over the government’s failure to implement the agreement and announced a sit-in on April 20.

The TLP wants Pakistan to sever its diplomatic ties with France and expel its ambassador for repeatedly publishing state-sponsored blasphemous sketches. Passengers in the city and the provincial capital had difficulty reaching their destinations.

Police also went out to maintain law and order but immediately after their appearance on the streets. The situation escalated later, when TLP activists resorted to violence. Police also used force. As a result, a series of controversies erupted in various parts of the city.

Violent clashes have been reported in Shahdara. A police constable, Mohammad Afzal, was seriously injured at Shahdara and died. At Chung, protesters even opened fire on police. Two policemen were shot and wounded in Chung, while more than 40 policemen were injured in the violent clashes.

The police also resorted to tear gas shelling and sticks to disperse protesters. The TLP has also claimed the deaths of its workers. On some points, the police succeeded in removing protesters. However, he regained his post shortly afterwards.

Rangers also patrolled the city and continued to disperse protesters. A Rangers youth was also injured. Meanwhile, TLP workers continued protests and sit-ins across the country on Tuesday demanding the release of Saad Hussain Rizvi.

Protests and sit-ins disrupted traffic. Even the railway crossing was not spared which added to the hardships of the people. Rajna police registered a case against 126 TLP workers during their protest between Monday and Tuesday night for assaulting and injuring six policemen, tearing their uniforms and snatching their helmets and shields.

Meanwhile, angry activists armed with sticks and stones attacked the Bahawalpur bypass early on Tuesday morning as police tried to maintain law and order on the Multan-Dera Ghazi Khan and Multan-Bahawalpur bypass. Roads were trying to clear.

An ambulance coming from Bahawalpur got stuck in a traffic jam. Meanwhile, the divisional administration and regional police dispersed TLP workers in a joint operation and reopened the Bahawalpur bypass.

On Tuesday morning, about 1,150 police and Rangers marched on the Sutlej River, where they launched a clean-up operation and resumed 16 hours of traffic. Meanwhile, in Bhokan Patan Bahawalnagar, hundreds of TLP workers continued their protest and sit-in on Tuesday despite a heavy contingent of police and Rangers.

He also tortured policemen. Police cracked down on TLP workers in different cities and arrested 15 workers. Police arrested more than 56 TLP workers during a crackdown in Hafizabad.