Will The TLP’s Trouble Give Rise To A Militant Organization? 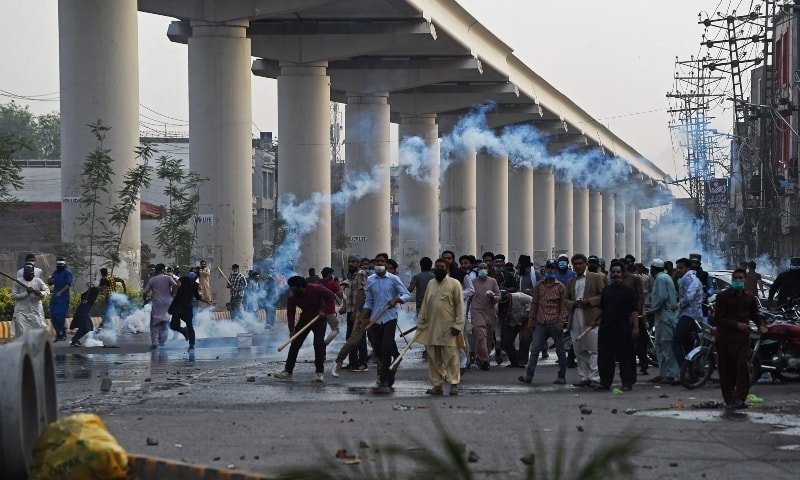 On March 18, 2021, in Islamabad, a man named Musawar Ali snatched a gun from a policeman stationed outside the office of the Superintendent of Police City (SP City) and fired four shots into the air. The aim was to enter the diplomatic enclave next to the SP City office and attack the French embassy there.

Ali, a resident of Satellite Town, Sargodha, had traveled to Islamabad by public transport. Under interrogation, he expressed his desire to avenge the alleged insult in France to the Holy Prophet (SAW). Police sources revealed that although he was not a regular member of the TLP, he was provoked by the political atmosphere created by the party in the province. The man was later charged with terrorism and sent to prison.

The attempt at the French embassy in Islamabad is not an isolated incident. A former senior officer of the Counter-Terrorism Department (CTD) of the Punjab Police, on condition of anonymity, revealed that two years ago, a man telephoned Khadim Rizvi, the founder of the TLP, and told him that he In response to blasphemy, Khadim Rizvi said that he was planning to kill a person whom he found guilty. ، “Is such talk on the phone? ”As the phone was being tapped, the caller was arrested, charged with terrorism, and sent to prison.

So far, there is no evidence that TLP founder Khadim Rizvi and his son and successor, Saad Rizvi, were involved in terrorism, although there is no doubt that their words were provocative.

Although the government banned the organization as a terrorist organization on April 15 through a notification from the Interior Ministry, it is not yet clear whether the government will abide by its decision or surrender at another stage. Will or will not

The rise of TLP in Punjab came in 2016 after the execution of Mumtaz Qadri, who assassinated Punjab Governor Salman Taseer in January 2011. Qadri had assassinated Taseer, accusing him of blasphemy. Later, it was alleged that not everyone in the state apparatus at the time was silent about the powers that govern their politics and registration as a political party.

Ehsan Ghani, head of the National Anti-Terrorism Authority (NATA), issued a formal warning about the party’s activities in his official dispatch, urging them to stay out of the political and electoral arena. Their recommendations were ignored.

Under the previous regime, the TLP twice knocked on the doors of the capital and partially paralyzed the daily life of a citizen of the twin cities of Islamabad and Rawalpindi.

Against the backdrop of recent events in France, the TLP has now landed in Islamabad on two more occasions during its tenure in the PTI government. In November 2020, the government was also obliged to sign a negotiating agreement with the then Interior Minister Brigadier (retd) Ijaz Shah, while negotiating the expulsion of the French ambassador from the country. The commitment was emphasized. Gradually, the TLP has gained growing popularity across the country through its coercive tactics.

When two government ministers, Sheikh Rashid Ahmed and Noorul Haq Qadri, arrived in Punjab on April 11, 2021 for talks with the TLP, and local intelligence officials approached the TLP to arrange a meeting, the ministers were made to wait. Two hours before permission to meet with the TLP Advisory Council.

During the talks, federal ministers presented a parliamentary resolution to TLP representatives, which was due to be tabled, but they rejected it and pressured the government to table a resolution calling on the French government and other European countries. A special mention has been made.

Official sources said the decision to take action against the TLP was taken on April 12. Punjab IGP Ehsan Ghani was immediately directed to arrest Saad Rizvi. This recipe right away. This was done, and although there were significant demonstrations in other parts of the country, the largest reaction was in Lahore. Although Punjab Police is directing the arrest of TLP leaders, the failure of policymakers to find police input for the operation led to a lack of concerted efforts, which led to more TLP leadership appearances in various cities.

As a result, protests by the TLP could not be stopped, and trade activities in Punjab and Karachi were severely hampered.

A senior government official confirmed that the decision to ban the TLP had come from a high level in the government. Important recommendations in this regard had already been sent to the central government by the provincial government and the Home Minister announced the ban the very next day. Official notification of the ban was issued on April 15.

The notification alleges that the TLP is involved in terrorism. This is a remarkable event as the organization has never formally announced its intention to carry out sectarian killings, bombings or suicide attacks.

It is not that TLP’s activities were not monitored. In fact, CTD Punjab had compiled a list of 108 TLP members in the province who have also been included in the list of suspected terrorists in the fourth schedule of the Anti-Terrorism Act (ATA).

Individuals who are at risk of violence, terrorism or public safety are listed in the Fourth Schedule. Talking to TLP on January 11, Interior Minister Sheikh Rashid and Religious Affairs Minister Noorul Haq Qadri agreed to remove the names of TLP members from the list. Paused.

CTD Punjab officials say that after the announcement of the ban on the party, they are once again adding these 108 people to the Fourth Schedule list and are rapidly adding more names to this growing list.

Meanwhile, in an unprecedented and alarming development, the already banned terrorist organization Tehreek-e-Taliban Pakistan (TTP) not only announced its support for the TLP immediately after the April 14 ban, but also publicly threatened that ” Every drop “will be avenged. Blood of TLP members. For the TLP, the Pakistani Taliban’s confirmation that this is the first time a Deobandi organization (TTP) has been seen forming an alliance exclusively with the Barelvi organization (TLP) is noteworthy.

“In the past, Sunni militancy involved Deobandi and Wahhabi groups,” said Tariq Pervez, a former police officer who specializes in counter-terrorism and is the founding head of the National Anti-Terrorism Authority (NACTA). Barelwis had nothing to do with it. Even if a Barelwis were drawn to militancy, it would be in his individual capacity. The TTP’s support for the banned Barelvi organization, the TLP, is an attempt to end the scattered role of militancy among Sunni factions and achieve a common goal. This is a very dangerous development, and we need to take it more seriously. More than military forces, civilian forces have a role to play.

The most important question now is whether the latest outlawed TLP will regularly choose the path of militancy and violence, or try to stay within the system. Experts are divided over whether the TLP will choose the path of terrorism. “The TLP has definitely chosen the path of terrorism, and no one should have any doubts about it,” said Mujahid Hussain, a prominent journalist and author of four books on terrorism. He has already demonstrated this orally during the Faizabad sit-ins and is now demonstrating it in practice across the country.

According to Mujahid Hussain, they have been given a lot of space in the past, and they know full well that they will not be valued unless they resort to violence. They have chosen the path of violence not only nationally but also internationally. In Germany, a TLP sympathizer attacked a newspaper office, and a Pakistani involved in the recent attack on Charlie Hebdo magazine (which published the controversial cartoon) in France accused similar thinking.

Meanwhile, Mohammad Amir Rana, a well-known counter-terrorism expert, author of several books, and director of the Pak Institute of Peace Studies has a different view on the issue: Will avoid To fight for its political survival, use terrorism, and instead protest and violent demonstrations. The future of the banned party also depends on its vote bank and how the authorities will evaluate its potential usefulness in the future.

Get help unlocking your site