The government has decided to ban the TLP 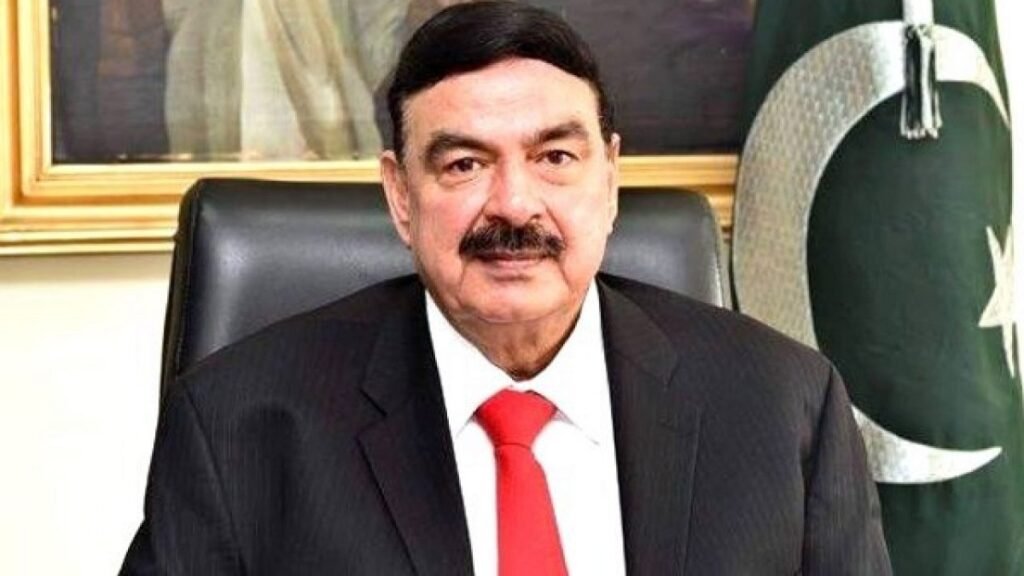 The government has decided to ban the Tehreek-e-Lubaik Pakistan (TLP) under the Anti-Terrorism Act as its activists, supporters and activists have been staging violent protests across the country for the past three days against the arrest of their leader. ۔

“The Punjab government has requested a ban on the TLP and a summary will be sent to the cabinet for approval,” Interior Minister Sheikh Rashid Ahmed told a press conference on Wednesday. He said the TLP was banned for its involvement in violence in the country.

The minister said that two policemen were martyred and 340 others were injured in the last three days due to violent protests. He said that TLP leaders used to negotiate with the government at all times after issuing instructions to their workers regarding road closures. He said that TLP workers are very much ready to create more unrest and it has been decided to ban TLP and in this regard, the file is being transferred to the Cabinet for approval.

Sheikh Rashid said that TLP workers had blocked roads and prevented ambulances from reaching their destination and obstructed the movement of oxygen cylinders for 19 COVID patients undergoing treatment in various government hospitals.

He said that TLP workers wanted to come to Faizabad Chowk and Islamabad at all costs but their wider preparations were effectively countered by the police. He said that GT Road and Motorways have now been cleared for traffic while Faizabad in Rawalpindi will reopen today.

He said that the activities of TLP have tarnished the image of Pakistan at the international level. He said that he (TLP) wanted such an agreement that all Europeans should leave Pakistan.

Sheikh Rashid said that two policemen were killed and at least 340 were injured in the violence and the law would definitely follow those who spread the message of road blockade and unrest through social media.

He called on TLP members on social media to surrender because they were mistaken in believing that they could create problems for the government. The minister said the policemen had been taken hostage by TLP workers to bargain over their demands but had now returned to their police stations. He said that motorways, GT Road, and other roads have been cleared for traffic, adding that Pakistan Rangers have done a great job in cooperating with the police and administration in this regard.

“Attempts were made at the last minute to persuade him to agree to the resolution to be tabled in the assembly, but all our efforts failed because he wanted to include unacceptable material,” he said. “We want a document that raises the banner of the Holy Prophet (SAW), but their demands were to give the impression of an extremist state of mind about us,” he said. He told the TLP leadership, “We want a document in which the flag of the Holy Prophet (SAW) is hoisted, but what you are demanding is that we make the world an extremist state of mind.” Give the impression.”

He said the government was still committed to introducing a bill in the National Assembly on Namoos Rasalat and had held several meetings with TLP leaders in this regard.

“The government intends to proceed with the earlier agreement with the TLP, but our efforts to persuade them have failed,” the minister said. He said angry people snatched a rifle from a police officer and used it to fire on others during a demonstration.

In response to a question, Sheikh Rashid said that he never supported the TLP nor met Khadim Hussain Rizvi. He said that the ban on TLP was being imposed because of the role of TLP and not because of any political compulsion.

Earlier, they held a meeting to review the law and order situation and renew their commitment to deal with the iron hand that took the law into their own hands. The meeting was attended by Minister for Religious Affairs Noorul Haq Qadri, Home Secretary, Inspector General of Police Punjab and Islamabad, Chief Commissioner Islamabad, and representatives of Pakistan Rangers and other law enforcement agencies. The Minister congratulated the security personnel for clearing the areas from the protesters and further directed them to ensure the writ of the state at all costs.

Meanwhile, 250 people have been charged with murder and terrorism against protesters who tortured police officers and other law enforcement personnel and ransacked and damaged public and private property and vehicles on the country’s roads. Delivered It has been reported that TLP sit-ins have ended in several cities, while protests continued in some places and roads remained closed.

Police alleged that protesters have stirred and attacked the police. Police have seized a generator, 10 motorcycles, a deck, and a loudspeaker. It is noteworthy that the protesters, who were chanting slogans claiming that they would not spare any sacrifice in honour of the last Holy Prophet (PBUH), had no weapons at that time.

After a four-hour-long clash between law enforcement and TLP workers, police and Rangers have taken full control of the city of Rawalpindi, but the Faizabad intersection was closed on all sides until the report was filed here on Wednesday.

On the other hand, TLP workers have threatened to lock down the entire city again until their demands are met. Protests by TLP workers against the arrest of his party chief Maulana Saad Rizvi turned violent, injuring several law enforcers, including Ranger officials, in Rawalpindi.

Liaqat Bagh turned into the battlefield when the police spread violence, the police fired the shells to disperse protesters, while the protesters had stirred on police officers late at night. On Wednesday morning, law enforcement agencies cleared Liaquat Bagh, opened all roads, and took full control of the city.

GT Road, T Chowk, Peshawar Road, Kashmir Highway, Tarnol Road, and several other roads have been opened to all types of traffic. Law enforcement agencies have set up large containers here in Shamsabad. Faizabad intersection was closed due to the installation of large containers.

Several police officers and protesters were injured in the clash, while some police officers were also seriously injured. The injured were later shifted to Allied Hospitals for medical treatment. Law enforcement agencies used tear gas shells against stone-throwing protesters, who seized all areas of the city. City police also arrested several TLP protesters and transferred them to different police stations. Protesters also damaged bus stations with stones and bamboo. They also smashed windows in nearby plazas and shops during the clashes.

Nearby residents panicked to see tear gas shells all around on the first of Ramadan. Police and Ranger officials were patrolling the city of Rawalpindi to maintain law and order.

Rawalpindi District Police, with the help of the Anti-Riot Force (ARF) and Rangers, set out on Wednesday morning to disperse TLP workers and began their work to maintain order in the city.

The Establishment, on the other hand, decided to involve the leadership of the protesters in talks to avoid the use of force against angry TLP activists, sources said, but in view of the deteriorating peace situation, the government has resorted to force. Decided to use law and order and establish the writ of law.

A joint team of police and Rangers was deployed in the most sensitive and turbulent areas including Committee Chowk, Murree Road, Mayer Chowk, Liaquat Bagh, Rawat, Gujjar Khan, Taxila, Fateh Jang, and highways from Kashmir and Murree to Rawalpindi. Included. Where clashes and unrest were on the rise and angry people blocked the main roads and arteries and separated the twin cities from other areas.

Meanwhile, Pakistan People’s Party (PPP) Chairman Bilawal Bhutto Zardari has strongly condemned the violence in different parts of the country over the past three days, in which two out of seven policemen were killed in different incidents.

In a statement on Wednesday, Bilawal Bhutto Zardari said that such violence, vandalism, vandalism of public and private property and mob attacks on police personnel could not be stopped. “Those responsible should be dealt with in accordance with the law, and the government cannot be allowed to abdicate its responsibility,” he said.

“This week’s naked violence shows that the elected government has dragged the country into a deadly quagmire, where no one is safe,” he said. “Under the PTI government, even the police seem to need protection, because the government has abandoned the people,” he said.

Bilawal Bhutto Zardari said that the PPP expressed sympathy with the martyred policemen as well as the innocent people who lost their lives in the violence in Punjab and other parts of the country and urged the injured to get the best possible medical facilities.

In Lahore, meanwhile, for the third day in a row on Wednesday, violent protests by TLP workers deepened the first life of Ramadan.

The number and scale of protests in the provincial capital by a religious organization against the arrest of their central leader Saad Rizvi by law enforcement agencies have caused traffic jams on the city’s main roads and surrounding areas.

Despite crackdowns and operations by police and paramilitary forces, protesters continued to block roads at 13 locations in the city during the day. During the last two days (Monday, Tuesday), they blocked the road at more than 22 places in the city. On this day, the entrances and exits of the city, motorways and highways were cleaned. In the evening, however, the number of protest sites dropped to seven. Police also listed more than 40 FIRs for violent operations against protesters, including another FIR in connection with the murder of police constable Ali Imran in Gujjarpur against Saad Rizvi and others.

On Wednesday, a group of protesters attacked the emergency gate of Lahore General Hospital. The suspects were chasing police officers. They fled to the basement of the hospital building for shelter. Protesters chased them and attacked the hospital.
A few clashes were reported between police and protesters at Babu Sabo Interchange, Ring Road, Chongi Amr Sadhu and other places in the city.

In some places, such as the Shanghai Bridge Chongi Amr Sadhu, protesters smashed tuff tiles to be used as stones against police. He also punctured trucks and vehicles parked on the roads to close the traffic.

Meanwhile, Lahore police conducted a flag march for the second day in a row passing through various streets of the provincial capital. The march was led by Lahore CCPO Ghulam Mahmood Dogar. This included senior police officers, DIG Investigation, Operations, and SPs.