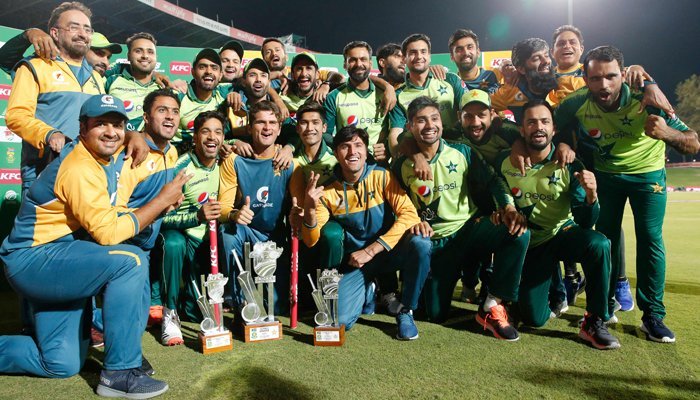 Pakistan beat South Africa by three wickets in the final match of the four-match T20 series at Centurion’s Super port Park to win the series 3-1.
Pakistan, like South Africa, faced a break in the middle order as it went from 92-1 to 129-7.

However, Mohammad Nawaz kept the end cool and with the help of some poor bowling from the hosts, he allowed the tourists to win the ODI series 3-1 with a one-day victory earlier this month.

At the start of the innings, Mohammad Rizwan left Babar Azam for 24 and Fakhr Zaman, 60, to help Pakistan stay on track until he faced the end of the middle order.

Nawaz scored 25 runs and finally hit a six to end the match.

After losing the toss, the batting prostheses were bowled out for 144, which is usually a high-scoring ground.

After the initial loss of Eden Markram, South Africa reached 73 for one when Fahim caught Janiemann Milan in the ninth over at mid-off for 33.

Fahim took the wickets of South Africa captain Henrik Klaassen and George Linde. He bowled four overs in a row and did not accept a single boundary.

Although South Africa set a massive 204-run target, Pakistan easily chased it down to chase nine wickets and take a 2-1 lead in the four-match series.

Babar Azam scored 122 runs which included a total of 15 fours and four sixes while Mohammad Rizwan scored an unbeaten 73 runs with the help of five fours and two sixes.

South Africa is hopeful that their fielding in today’s game will reach the point where they can easily bid farewell to the visitors in the third T20.