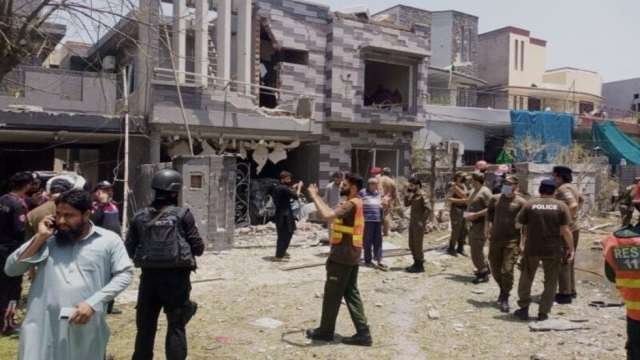 Two people were killed and at least 17 others were injured in an explosion at a house in the Johar Town area of ​​Lahore, Geo News reported, citing rescue personnel on Wednesday.

According to the report, rescue, police and bomb disposal teams reached the spot, while the injured have been shifted to Jinnah Hospital in the city.

Eyewitnesses say the glass windows of nearby houses and buildings have been shattered. A building was severely damaged and some vehicles parked at the site of the blast were also affected.

Hospital officials say about two dozen people were injured and were transported by private cars and auto-rickshaws to Jinnah Hospital in Lahore.

The Jinnah Hospital administration has asked people to come forward and donate blood for the injured, he added, adding that the injured are being treated.

The injured included a policeman, a woman and two children, according to hospital officials. Due to the burns, the condition of all the injured is critical.

The blast was so loud that it could be heard in remote areas. However, the nature of the blast is not yet known. An eyewitness told Geo News that an unidentified man parked a motorcycle near the house, which later exploded.

Police have cordoned off the area for further investigation while traffic has been redirected.

Following the incident, Punjab Chief Minister Sardar Usman Bazdar has asked the Inspector General of Police to submit a detailed report on the blast.

Going on Twitter, the Punjab government announced that the Chief Minister has ordered an immediate inquiry into the incident.

A state of emergency has been declared at Jinnah Hospital for the treatment of the injured, while Rescue 1122 and other aid organizations have been asked to step up relief activities.