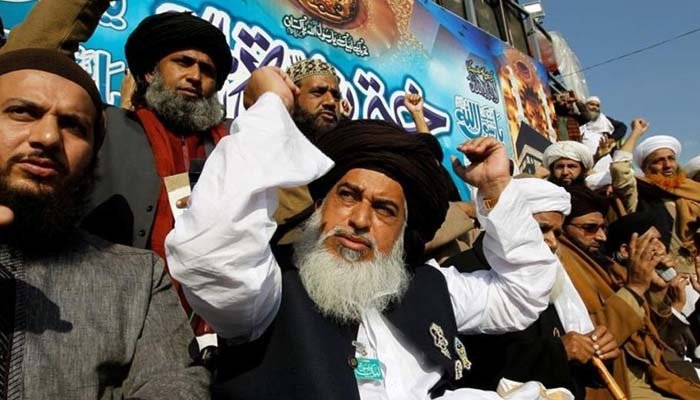 Share
Facebook Twitter LinkedIn Pinterest Email
LAHORE: The Punjab Cabinet has approved the summary of removal of banned status from Tehreek-e-Lubaik Pakistan.
According to sources, the Punjab Home Department had sent a summary to the cabinet members through a circular after the approval of Chief Minister Usman Bazdar.
According to sources, the Punjab government, after approving the summary, will now recommend to the federation to lift the ban on TLP.
Sources said that the summary needed the support of at least 18 ministers, with the required number of ministers approving the lifting of the ban on the circulation summary. The federal government will take the next step after receiving the written recommendations of the Punjab cabinet.
It may be recalled that a few days ago, a government team led by Foreign Minister Shah Mehmood Qureshi and Minister of State Ali Muhammad Khan had held talks with Mufti Muneeb-ur-Rehman and other religious scholars on the issue of Tehreek-e-Lubaik Pakistan.
More than 2,000 TLP workers have been released so far in the light of an agreement reached as a result of negotiations between the parties, while the TLP has called off sit-ins in various cities, but some workers in Wazirabad. There are those who intend to stay until the agreement is fully implemented.
206
Share. Facebook Twitter Pinterest LinkedIn Tumblr Email